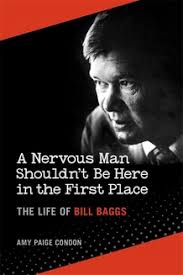 TONIGHT: Crowdcast or @TheCleat/Boaters Grill: An Evening with Amy Paige Condon In conversation with Craig Baggs and Dr. Gregory Bush

An Evening with Amy Paige Condon

In conversation with Craig Baggs and Dr. Gregory Bush

A Nervous Man Shouldn’t Be Here in the First Place: The Life of Bill Baggs

“This is not a simple life, my friend, and there are no simple answers.”

The late editor of the late Miami News, Bill Baggs, stamped these words on plain white postcards and sent them to readers who sent him hate mail–a frequent occurrence, as Baggs, a white editor of a prominent southern newspaper, championed unpopular ideas in his front-page columns, such as protecting the environment, desegregating public schools, and peace in Vietnam.

Under his leadership, the Miami News earned three Pulitzer Prizes. For his stances, Baggs earned a bullet hole through his office window, police officers stationed outside his home, and a used Mercedes outfitted with a remote starter so that if it had been rigged with a bomb, it would blow up before he opened the door. Despite his causes and accomplishments, when Baggs died of pneumonia in 1969 at the age of forty-five, his story nearly died with him, and that would have been a travesty because Baggs still has so much to teach us about how to find the answers to those not-so-simple questions, like how to live in peace with one another?

In this first biography of this influential editor, Amy Paige Condon retraces how an orphaned boy from rural Colquitt, Georgia, bore witness and impacted some of the twentieth century’s most earth-shifting events: World War II, the civil rights movement, the Cuban Missile Crisis, and the Vietnam War. With keen intellect and sparkling wit, Baggs seemed to be in the right place at the right time. From bombardier to reporter then accidental diplomat, Baggs used his daily column as a bully pulpit for social justice and wielded his pen like a scalpel to reveal the truth. 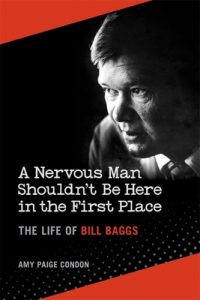 AMY PAIGE CONDON is the founder of the Refinery Writing Studio and the associate editor of Beacon, a quarterly news magazine published by the Savannah Morning News. She is the coauthor of Wiley’s Championship BBQ Cookbook and The Back in the Day Bakery Cookbook.

CRAIG BAGGS—the son of two Georgia peaches, Bill and Frec Baggs—grew up in the strange alchemy of journalism and politics that swirled in midcentury Miami. He attended his first national political conventions at age six, and by the age of eleven, found himself standing in the Oval Office with his father, the editor of the Miami News, being introduced to Supreme Court Justice Earl Warren.

Craig studied the great books at St. John’s College in Santa Fe, New Mexico, and later received his B.A. in international affairs at Florida State University in Tallahassee, where he also worked on a master’s degree in communications. Shortly after getting married, Baggs moved to Tampa and started a career with the Tandy Corporation during the onset and expansion of personal computers. With a desire to get back in the field of media, he joined Scripps Howard in Lake County as ad sales manager in charge of cable advertising and commercial production. He later accepted a position with Cox Communications in Ocala, where he and his wife, Mary, have raised their three children. He later developed ad campaigns, consulting for local politicians and the owner-operator of A1 Computer Geeks.

After five years as a benefits consultant in the healthcare industry, Craig retired. He is a member of the Marion Cultural Alliance, a reading pal for the United Way of Marion County, a member of the Friends of Silver Springs, and a board member at Interfaith Emergency Services. He enjoys time at the family getaway on coastal Georgia, gardening at his beloved home “Kingfish Corner,” and growing up once again with his six grandchildren and grand dog Mack, who like Craig, is a southern gentleman.

DR. GREGORY BUSH, received his Phd in History from Columbia University and was a History Professor and Director of the Institute for Public History at the University of Miami from 1983 to 2018. He established the Louis Wolfson/Florida Media History Center, was a founder and President of the Urban Environment League, and founded Nature Links for Lifelong Learning which he now runs in Blue Hill Maine. naturelinksmaine.org where he lives with his daughter Paula. Nature Links addresses the largely unmet needs of neuro diverse post secondary young adults.   Bush is co-author with Arva Parks McCabe of Miami: The American Crossroads (1996), and author of Lord of Attention: Gerald Stanley Lee and the Crowd Metaphor in Industrializing America (1991) and White Sand Black Beach: Civil Rights, Public Space and Miami’s Virginia Key Beach (2016) which won several state awards.